SUN COAST RESOURCES, INC. IS CURRENTLY RESPONDING TO WINTER STORM MARA. PLEASE CALL US FOR ALL YOUR FUEL, PROPANE, AND WATER NEEDS AT 800-677-3835 EXT. 567! STAY SAFE! 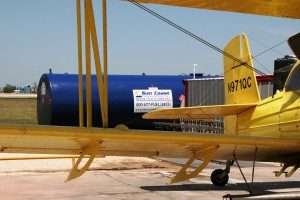 Avgas is gasoline fuel for reciprocating piston engine aircraft and is not to be confused with jet fuel. As with all gasoline, avgas is very volatile and is extremely flammable at normal operating temperatures. Therefore, procedures and equipment for safe handling of this product must be top priority.

In the past, there were many different grades of aviation gasoline in general us. For example, 80/87, 91/96, 100/130,108/135 and 115/145. However, with decreasing demand these have been rationalized down to one principle grade: Avgas 100/130. (To avoid confusion and to attempt to eliminate errors in handling aviation gasoline, it is common practice to designate the grade by only the lean mixture performance. For example. Avgas 100/130 becomes Avgas 100). More recently, an additional grade was introduced to allow one fuel to be used in engines originally designed for grades with lower lead contents. This grade is named Avgas 100LL, the LL standing for ‘low lead’.

All equipment and facilities handling avgas are color coded and prominently display the API markings denoting the grade carried. Currently, the two major grades in use internationally are Avgas 100LL and Avgas 100. To ease identification the fuels are dyed. For example Avgas 100LL is colored blue, while Avgas 100 is colored green.

Avgas fueling nozzles for overwing dispensing are painted red. To help prevent the possibility of jet fuel being supplied to a piston engine aircraft, the nozzle of an Avgas fueller is limited to a maximum diameter of 40 mm (internationally) and 49 mm (United States). The aperture on an aircraft Avgas tank is limited to a maximum of 60 mm diameter. Since nozzles for Jet A-1 are larger than 60 mm, they cannot be placed into an aircraft’s Avgas tank.

Along with more sustainable and environmentally friendly options such as ethanol, biodiesel and E85, Sun Coast is now offering CNG and LNG transport with new, state-of-the-art trucks to handle high-pressure deliveries. We’re responsibly fueling the i…